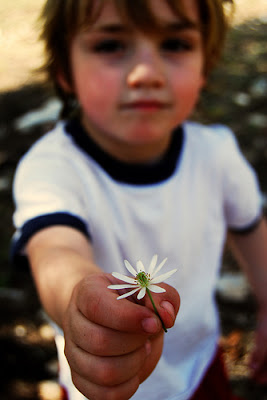 In the summer of 1988 I took a part-time job as a lifeguard at the local, neighborhood pool. I was still living at home trying to figure out what I wanted to do with the rest of my life, and it seemed a like a pretty good idea.... sit in a chair all day and get a great tan while gettin' paid. I thought it would be easy money. I was dead wrong. The pool was owned and operated by the VFW... or maybe it's the American Legion. Legion, I think. Anyhow, of course it attracted all the local drunks. Not too bad during regular daytime pool hours, but afterwards could get pretty rough.

Sammy was a regular to the pool.. and his Mom was a regular at the Legion. She'd drop him off and disappear into the bar just about every day. He was only about seven or eight at the time, I think. Sweet little boy that quickly attached himself to me, and settled into my heart so, so effortlessly. He always put his towel and assorted toys on the grass behind whatever chair I was assigned to that day. Endlessly happy and chatty, he was. He'd often bring me a bunch of Dandylions that I'd lay under my chair where they'd quickly wilt and die in the hot sun. He didn't know how to swim, and on my off days when I was at the pool, I'd try to teach him how. Never did learn how to. He was just simply too scared to relax in the water, and that's one of the most important steps in learning to swim. He'd cling desperately to me, and sometimes start to cry in frustration with himself. I always told him that it was ok, and he'd learn someday. I really hope he did.

This is probably not the best written blog post, and I apologize for that, but it's hard for me to "talk" about this. Plus I'm going through a really rough patch emotionally right now for some reason, and my thought processes aren't really up to par. Anyhow, the job sucked big time. lol After closing time, a few of the drunks from the bar would crash the place. Of course, there is no reasoning with a drunk person. They are always right... and you're just a stick in the mud if you disagree. Management wasn't interested in doing anything about it either. "Just leave, Ottey. Don't worry about it!" But I couldn't leave... It went against everything my parents taught me, everything I believed to be the "right" thing to do. That damn cricket in my head wouldn't let it go. Sometimes a conscience is a bad, bad thing. lol So, I'd end up sitting at a picnic table, watching and cringing.. until they tired of their antics and left. Didn't get paid for it either.

My resentment steadily grew and grew and grew... I wanted to quit that job REAL BAD... but there was Sammy. I didn't want to leave him behind. Truth be told, by the end of it all, I coulda cared less about the drunks. They were already drowning themselves in alcohol anyhow, and they resented my ever judgmental presence to boot. And get rid of me they finally did... but it was on their terms, not mine... One night I was sitting at the table reading a book. They'd all left and went back into the bar. Except for the one guy.. the fucking really mean one. He stayed behind and was just floating in the middle of the pool. I didn't think anything of it. That I was pretty much alone with a drunk guy. Until he got out of the pool and started laying his hands all over me. Grabbing and laughing. Reeking of whiskey and chlorine. I can still see his grin. Sometimes I wake up night, sweating and scared. I still see his leering face in my dreams occasionally. BUT! Luckily for me, I was half his age and outweighed him by at least thirty or so pounds. Probably a good four inches taller too. (Thank you, DAD!) Being 5'11" tall ain't all that bad sometimes. :)

So, after pushing him to the ground and running to my car... I left.. and I never went back there again. Even to this day, I refuse to even LOOK at the place when I drive by it on the way to town. I often wonder what Sammy thought. How he felt when I never came back. I should have went back during the day to be with him. But that's not how the story went. I was too angry, too scared and too fucking WEAK. I'm sorry, Sammy. You were one of the truly bright spots in my life back then... and left ya without as much as a glance back or a word of explanation as to my leaving. :*( 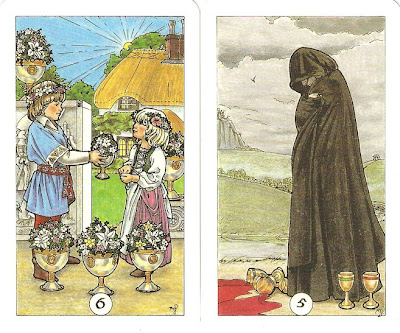 This post was inspired by my facebook friend, Donnaleigh, who writes a wonderful Tarot blog on her website Divine Whispers. Plus someone else, but I'll leave him anonymous. Today, her Tarot exercise was on Flexibility and Firmness. I pulled two cards for this and got the Six of Cups and the Five of Cups from the Robin Wood Tarot deck. Sammy was very flexible. His lesson to me back then was to STAY flexible, even when life is pretty rotten. He was always such a happy kid, despite the fact that his Mom was a drunk who got passed around at the bar more than the bowl of peanuts. (That's pretty harsh, I know.. but it's the truth.) I should have been more flexible like he was. Always willing to brighten someone else's day by bringing them flowers, even when the rest of his life was pretty darn bleak. And I shouldn't have been so firm with holding on to my pain, fear and disappointment about that bad experience. I should have let it go and moved away from it. There were still two perfectly fine, upright cups behind me, but I just wouldn't or couldn't turn around to see them.

I failed to see the life lesson in all of this back then. I see it all too clearly now. Don't just completely quit because one unstable person tries to take your good deed and take advantage of it. Stand firm. There might be someone else connected to it all that really needs you to be strong. And also, do it for yourself. You'll avoid a whole lotta guilt and gain a load of self-respect. <3
Email ThisBlogThis!Share to TwitterShare to FacebookShare to Pinterest 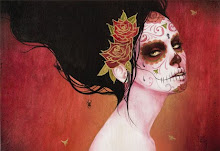